You and your Skeleton Crew are the minions of the great and powerful Necromancer! Your duty is to fulfill their wishes to the best of your ability, the only problem is Necromancy is forbidden, so you must pretend to be human while out in public spaces.

Numbskulls is a single page tabletop game for a Game Master and 2+ players that uses cartoon logic and slapstick failures.

It is rules-lite , fail positive game which features two distinct ways in which a skeleton can fail their tasks.

The game also includes a Character Sheet which doubles as a coloring book page for disguising your skeleton and decorating your gravestone.

Special Thank you to Samantha Leigh for the TikTok Review featured at the top of the page!

This game is published under the CreativeCommons 4.0 Attribution License

I.e. You may hack, modify, and make supplementals for Numbskulls and charge for it as you see fit

Created and Uploaded  A5 PDF for the Tiny Tome Jam

This game is published under the CreativeCommons 4.0 Attribution License

In order to download this game you must purchase it at or above the minimum price of $5 USD. You will get access to the following files:

Support this game at or above a special price point to receive something exclusive.

Please take one,  no questions asked!

If none are available, let me know and I will refill it!

This game is fun and silly. I was a little nervous about running it, as we had a player brand-new to ttrpgs, but he took to it like a fish to water and I'm really glad he had this introduction as it allowed him to understand how diverse they can be. Truly a delightful game to play and I cannot recommend it more!

Great game!  My kid and I had a lot of fun getting up to some skeleton shenanigans, and I would definitely recommend for anyone to try out.  I also did a full review here on my site - I hope it helps!

This game is so much fun! The simple rules make it really great for collaborative storytelling, and as an improv-heavy GM the game works really well with zero prep. The character sheets are perfect for setting the tone and I love the space to design your skeleton’s disguise. Bring crayons/colored pencils for even more fun at character creation!

Numbskulls is a true delight! Very silly, good for all-ages, and perfect for Halloween (or anytime you want to play as a skeleton, which is all the time for me).

The character coloring sheet is such a wonderful idea, I'd love to see this in more games!

Numbskulls is an all-ages-friendly two page rpg about skeleton minions pretending to be human in order to accomplish a task for their necromancer master.

That's some strong Three Raccoons In A Trenchcoat energy right off the bat, but there's more going on in Numbskulls than just covert antics. The skeletons have a (by default fairly warm) relationship with their necromancer, and the necromancer's goals are pretty mundane (go on a date, host a party, become mayor,) so the hijinks are grounded in a sense of family.

For the dice, conflicts are rolled with 2d6, and the goal is to land in a specific range. Skeletons start with a 7--8 range, but they can expand their Physical, Magical, or Social ranges by spending points at character creation. Rolling too low means you act too skeleton-y and scare people, and rolling too high means you act too human-y and draw a crowd.

All of this information is packed a little densely into Numbskulls' PDF, but it's still plenty readable.

And there's also still room for art, by the way. *And* the art is exceptional. It's charming, energetic, whimsical, and has a ton of character to it. I would buy a whole book of the art alone.

Speaking of character, the game's sheet (which is the second page of the PDF) is absolutely fantastic. It tracks your stats, but it also has a giant skeleton for you to draw an outfit onto, plus the whole thing uses a lovely front-and-back-of-a-gravestone aesthetic which is not only thematically neat, but you can stand it up and position your character sketch to face the rest of the table and your stats to face you. This is brilliant, and honestly it's one of my favorite character sheets full stop.

Overall, Numbskulls feels like an incredible synthesis of Three Raccoons In A Trenchcoat, Honey Heist, and Lasers & Feelings. It's got a fun setup, it feels extremely easy to play, and it's accessible to all ages / levels of familarity with rpgs. If you like wacky, charming one-shots, this game should be in your library.

It's a super good game, and I'm glad my review was helpful! 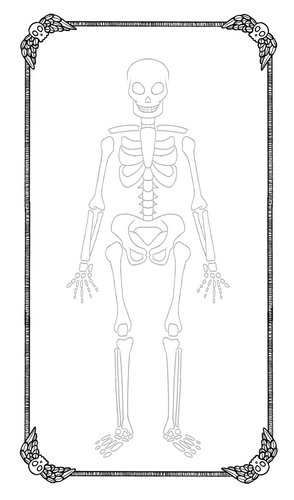